Explanation of Lateral, Axial and Angular Movements in PTFE Bellows


Bellows have the ability to move in response to forces and bending moments placed upon them by the equipment to which they are mounted, whether such forces are generated by expansion and contraction or plant vibration.

There are three key types of movement for which a bellows is designed.

The allowable amounts of these movements are given within the individual product nominal bore pages of our bellows brochure.

Please note that the published values are for independent movements, for combined movements each individual movement is reduced.

That is if 50% of the angular movement is being taken then only 50% of the lateral movement could be allowed if there were no axial movements. If each direction in movement was taken together then each would be limited to 1/3 of the published values as the overall distortion in the bellows is shared amongst them.

Bellows are not designed for rotational movement around the principal axis.

The mechanical design of the flanges, tie rods and limit sleeves are to assist in restricting the bellows movement within these safe ranges and are fundamental to the design.

It may be necessary to restrict movement still further and special bellows are available for these purposes. Hinged bellows allow angular movement only, whilst lateral bellows with spherical washers allow lateral movement only.

Please read further for full explanation of each movement.

Axial is the most frequently required type of movement and is specified in terms of the bellows minimum and maximum extension around it’s neutral length.

This is the mid-range position at which the bellows is set when shipped from the factory and should be as close to the installed length as possible.

Our Teflon® expansion joints can be installed at lengths between the minimum and maximum length, but this of course will restrict the amount of allowable movement. 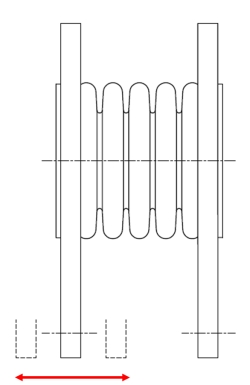 Lateral movement is at right angles to the principal axis. 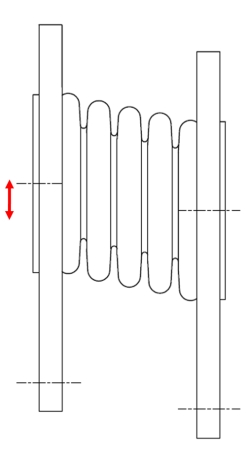 Angular movement is the movement of the flanges out of parallel. 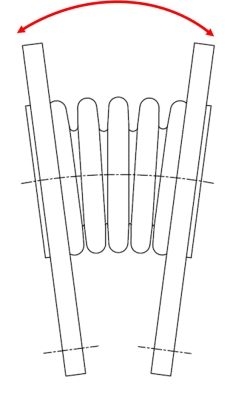 The longer the spool connecting the pair of bellows the greater the lateral movement that is possible. 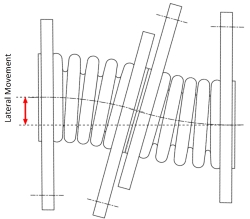